Kings of Sweet Feck All, is the seventh album from Swedish/Irish Celtic-punkster, SIR REG. I’m happy to report that Sweet Feck All continues in the tradition of previous REG releases – energetic trad-punk in the vein of early Flogging Molly (for want of a comparison) – vocalist Brendan Sheehy has a singing style reminiscent of fell Dub, Dave King, while Brendan’s lyrics are pure Dublineese – something you can’t fake.

Kings of Sweet Feck All is a great album of straight ahead Celtic-punk – fast, high energy with strong melodies across all 11 songs. Highlights include, The Coming Regime – my favorite track. The Story’s Been Told, about Dublin in the dreary 1980s (something I can attest to) and the pure Celtic-punk (and anti-lockdown) of, Open The Pubs, and, Goodbye To Your Freedom. A very recommended release.

Your virus free podcast from Shite’n’Onions.

The Arlington Arts centre is in the wilds of rural Berkshire, southern England. Not the most easily accessible of venues but one with great sound, lovely staff and one that isn’t shy of booking eclectic bands. Tonight was no exception; the Neil Brophy Band and Sweden’s finest, Sir Reg- both on the final night of their 11 date UK tour.

We’d taken our eleven year old son. He’s a veteran of the Celtic music scene for one so young; having seen Dropkick Murphys at Brixton Academy, Christy Moore, Tidelines and Ferocious Dog as well as having the Biblecode Sundays and the Lagan play in his living room! I mention this because he hates support acts. Hates ‘em. Just wants them to go away so the main act can hit the stage. He made an exception for the Neil Brophy Band who opened with Nice to Know, a tale of an emigre English troubadour returning to his home town after years abroad. Other stand outs from this Copenhagen based band included tales of Viking ghost ships, London boozers and the joys of being a musical gypsy. Drums, bass, mandolin, acoustic guitar, banjo, whistles and pipes all made for a full sound married to catchy lyrics and infectious enthusiasm. A great opening act and one which we will try to catch in the future. Their new album, True Stories is definitely worth seeking out.

Sir Reg hit the stage with their trademark high energy- a full-on Celtic punk assault which might have un-nerved some of the more folksy patrons of Arlington Arts. But you can’t not love Sir Reg. Sing along choruses, a perfect mix of fast punky tunes like new track The Underdogs sitting alongside quiet, slower more heartfelt numbers such as the brilliant All Saints Day. It’s always interesting to see a band who have a new album to promote as sometimes the gig can be a load of songs with which the audience are unfamiliar. Sir Reg got the balance right. New tracks were given an airing, like instrumental Cairbre, an ode to the MGN lion but older tracks like Emigrate were also thrown into the mix. The band were also very tolerant of fans like us shouting song requests at them- a request that resulted in a spirited rendition of Drinking like a Dane. They even managed to get the crowd singing along to The Wrong Bar- their brilliant cautionary tale of being so smashed that you confuse a church for a pub that saw Sir Reg joined on stage by the Neil Brophy band.

All in all, a top night. Great songs from two great bands. Looking forward to seeing them both again in the near future. 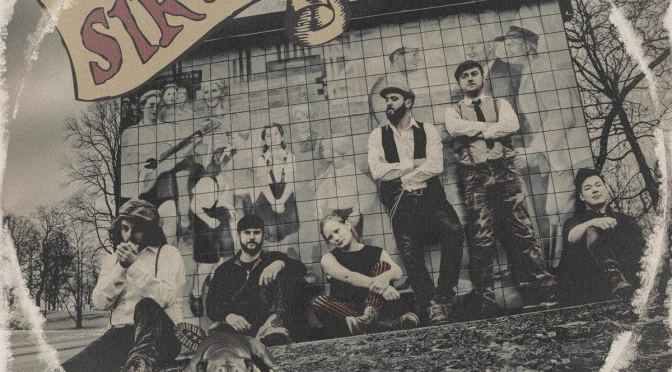 Wow is this really the sixth album from Sweden’s Sir Reg? They still seem like the spunky new guys on the block. Maybe it’s because they are still hammering out Celtic-punk at a neck-breaking speed with no sign of slowing down or ‘maturing’, just playing like that proverbial underdog’s bollox. The Underdogs is all everything we know and love Sir Reg for; the aforementioned fast as feck yet melodic Celtic-punk but also a lyrical wit so sharp it could kick the eye out of a maggot that only a true Dub could produce.

Tracks on compilation albums are like friends. You can find good friends like Sir Reg, Greenland Whalefishers and The Go Set. There are friends you have lost touch with and need to reconnect with – The Porters, The Killigans and Kilkenny Knights. Friends that you need to get to know better – Mickey Rickshaw and Hoist the Colors and of course friends that you haven’t met until now. Raise Your Pints – Vol.2 is a very good compilation and if you want to know what is going on in the European scene the MacSlon is the man.

Modern Day Disgrace is the fourth full length from Swedish (and Dub fronted) Celtic-punks Sir Reg. Sir Reg are one of the leaders of the new wave of Celtic-punk and are very much snapping at the heals of the original scenesters (that’s you Flogging Molly). No surprises on Modern Day Disgrace when compared to the bands previous albums – and that’s a good thing – head banging speed Celtic punk with a strong Flogging Molly influence. The album kicks off with three new classics End of the Line, Boys of St. Pauli and Drinking Like a Dane and continues through till they Call it a Day. Special mention to Dubliners influenced “The Wrong Bar” – Luke and Ronnie would be proud of yea lads and the afore mentioned Boys of St. Pauli which will be ripping up jigpits from Stockholm to Solna and Södertälje shortly. Highly recommended.

21st Century Loser is the 3rd full length release from Swedish-Irish Celtic-punk band SIR REG. And as with the prior two releases from Sir Reg, 21st Century Loser is 12 tracks of first class, balls to the wall Celtic-punk. Dublin born Brendan Sheehy fronts the band and his singing voice is more than a little similar to fellow Dub, Dave King of Flogging Molly. What sets SIR REG apart from the Celtpunk masses is the authenticity of the subject matter of the bands lyrics that deal with the current state of the Irish economy and the greed of the Celtic Tiger era that caused the implosion of the country and the band don’t pull any punches as to who’ fault it is for the whole bag’o’shite.

I’m not sure if the FLOGGING MOLLY comparison are starting to bug the folks at SIR REG, but truth be said, A SIGN OF THE TIMES, sounds more like FLOGGING MOLLY then FLOGGING MOLLY does these days. Dubliner, Brendan Sheehy’s accent, vocals and pitch sound so like fellow Dubliner, Dave King, that it’s scary and the rest of SIR REG can knock out a racked as good as anything Flogging Molly has done – fast, trashy, jig punk and all done with a drunken smile on their collective faces. Compared to the very fine, FECK THE CELIC TIGER, Sir Reg’s last album that we just reviewed here on the hollowed html of Shite’n’Onions, it’s a even a step up on that, the band are tighter and the songs more finely crafted. Highly recommended.

Sir Reg is a new one to me. Heard the name float about a bit, John Bowles @ Paddyrock gave them a best of 2010 for their debut Sir Reg . I know they are Swedish. The band sent me on a copy of Feck a little while back. The title was the first thing that impressed me – it pretty much sums up the Irish attitude to life these days – pretty good observation from Swede’s.

I give the album a 1st listen to on the train home from work – as expect on an initial listen good Euro-Celtic punk, I get distracted and fade out of the music, the music wasn’t having any of my distraction and soon I thinking WOW the new Flogging Molly sounds really good, a real return to form – then reality hits me like a can of Red Bull bouncing off my head – I’m not listening to Flogging Molly but some Swedish crowd and bhoy can the singer ape Dave Kings vocals and accent – crap he sounds like he came kicking and screaming into life at the Rotunda Hospital at the top of Dublin’s O’Connell street. A little research later and I discover the singer has a good Irish name – Brendan Sheey – and did come kicking and screaming into the world in either the Rotunda or The Coombe or one of the other maternity hospitals in Dublin. Easily the find of the year, even if we are a year late. Good news is that a new album is out soon – A Sign Of The Times – and I already have an advance copy!!!!

Apparently, this band out of Sweden went ahead and released the EP, “This Is Sir Reg” some time in 2009 and I am just getting a taste of it now! I mean, these guys could EASILY have secured a position on any Celtic-Punk ‘Best of 2009’-list based on the six tracks contained here. Easily.

So who is Sir Reg? Well, instrumentally, the band consists of guitar, bass, drums, vocals, keyboards, banjo, mandolin, whistles and fiddle, distributed among the Swedish and Irish musicians. The combination of these elements throws off a noise that is polished, professional, damned impressive.

Musically, the band has a sound that is immediately accessible; familiar, but fresh. For a point of reference, imagine a sound scale. At one end of it put Flogging Molly. At the other end, put Australia’s Roaring Jack.. And now, right smack dab in the middle of this scale, that is where I would put Stockholm-based Sir Reg! And the six-track E.P., This Is Sir Reg, contains all of the Swagger and Celtability found in those two venerable bands, rolled up into one tidy package!

Lyrically, Sir Reg is just as impressive. No shortcuts or clichés, no drinking songs or covers, This Is Sir Reg contains six ‘original originals’, of both intelligent and entertaining content. My particular favorite being the brilliant “17 Coffins” which tells the tale of Burke and Hare, a pair of Irishmen who moved to Scotland in the early 19th century and began a killing spree in order to sell the bodies to science for a tidy profit. Fun stuff, eh? But with phrases like “If you’re ever short on cash, just reach into the human stash,” one realizes that the subject matter is approached fairly tongue-in-cheek.

Normally, when this excited about a new band, I would recommend keeping eyes peeled for future releases, but if Sir Reg continues with the quality of material on This Is Sir Reg, we won’t won’t have to look very hard. We will hearing about them.

You can also grab a 30 second bite of their songs over at iTunes. Do it and you’ll see for yourself.