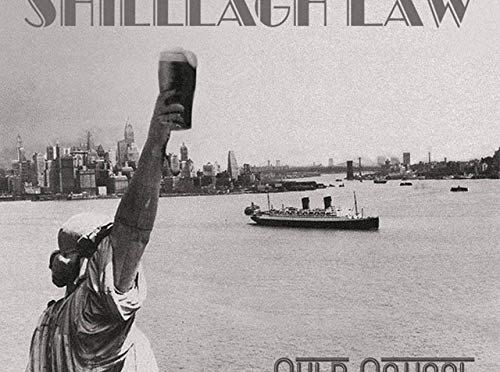 It’s been a while since I’ve heard anything from Yonkers NY Shilelagh Law. Auld School is the band’s seventh album (I think the last one I heard was either the first or second release). Auld School according to the press release is a return to the bands Irish roots after moving to a more polished sound on recent releases. To me Auld School is reminiscent of those early releases – High energy, stripped down, sing-along interpretations of Irish-American standards that should be on everyone’s Paddy’s day playlist. Still New York’s finest.

I’ve said this before have experience putting together compilation albums – it’s not easy. It isn’t a job of slapping a few ol’ track on a disk and pressing. The music and the tracks have to flow and complement each other, so hats off to Black 47’s Larry Kirwan for a fine job. The idea of this compilation is to showcase various bands that Larry has featured on his Celtic Crush show on Sirius XM radio. The comp has a nice mix of Celtic tinged acts – most more radio friendly then the stuff we do at Shite’n’Onions. We have some big mainstream names like Hothouse Flowers, Runrig and The Waterboys with a phenomenal live version of “Savage Earth”. There is Black 47 themselves with Uncle Jim, Shite’n’Onions fav’s Blaggards (no The) with an almost metal version of “The Irish Rover” and a classic blast from the past in Pat McGuire’s, “You’re So Beautiful”. The rest of the album is given to showcase some fine less established banks like Barleyjuice, Celtic Cross, Peatbog Faeries, Garrahan’s Ghost’s and Shilelagh Law.

Its been awhile since I’ve heard anything new from Shilelagh Law – maybe 6 or 7 years. Not that they haven’t been active – I just didn’t get to hear anything. So I’m glad to report I’m back on the mailing list. I’m also glad to report that nothing has changed musically. Shilelagh Law are still the best modern Irish ballad/trad-rock group on either side of McLean Ave. in fact maybe even the whole east coast! Dennis McCarty is still the finest fiddler in the NYFD and now he’s joined by Kevin McCarthy, NYPD’s best accordion player. Richard Popovicis still the finest Croatian-American singer of Irish tunes. Highlights for me are the full force trad cover of “The hills of Connemara” and the Tongue-in-cheek country/gospel tinged, “His Favorite”. If you like stuff like The Town Pants and Cullen’s Hounds you’ll love this.

Shilelagh Law are a NY-based Irish band and this is their second fill-length release. SL are a damn good band, not too heavy on the “punk” side of the spectrum, which is fine by this critic. A good example of a traditionally based Irish band sans the Clash influence is a rare thing these days. Refreshing. Very refreshing. It’s what I needed to escape the doldrums of yet another “Irish Punk” band.

Their motto is “New York’s Greatest Irish American Pub Band” and pub band is a good way to describe them – I can imagine sitting back listening to these guys in a dark corner, not too worried about much else except drinking and singing along.

The CD itself is a mix of originals and traditionals, with the trads taking up the majority of the disc. Favorites like “The Irish Rover” and “Sean South” are given the SL treatment – top-notch musicianship delivered with the professionalism of a band who should be making waves and taking this group to the next level. I also must mention “The Pioneer” done with enough flair to rival The Wolfe Tones. And THAT is a compliment.

These guys remind me heavily of the Dubliners and the aforementioned ‘Tones- things are kept clean and smooth even when they are sped up. An impressive set of musicians to say the least. These guys don’t rely on feedback or electric wailing’s to get their point across – they do it old school. Also included are two of my all-time favorites – a fine version of the heart-swelling “Fields of Athenry” and their version of “The Rare Auld Times” is one of the better I’ve ever heard – and believe me, the song holds a special place in my heart, so I’ve heard quite a very renderings.

Two originals stand out – a nice tribute to those who were lost on 9/11 in “Christmas in New York.” This one should be a Yuletide favorite. I know it was here in my stereo this season. Another SL original (I believe) is “Together in the End” which is also about 9/11 and is just as powerful: “And the heroes once forgotten are cheered on once again and a nation once divided stands together in the end.”

The disc ends nicely with a perfect version of “Boys of the Old Brigade/A Nation Once Again” which then segues into the ‘hidden’ track with the rebel’s attitude “Back Home in Derry”….”John Folk likes to sell Ben and Jerry’s” indeed. (Just listen to the track.)

All in all, these guys have the talent and fortitude to become big on the scene, and not by use of distortion to cover up mistakes or drunken wailing’s to sound indecipherable. This is done Dubliners style – free and loose, distortionless but with talent, fire and guts to back it up. And that’s all I ask for or need in a damn fine Irish band. Well done.

Kicking up a storm of contemporary Irish American and traditional Irish rebel and drinking songs without an electric instrument in sight is Yonkers, New York based Shilelagh Law. “…Half the Bottle Down”, the self-released debut CD is split between nine traditional standards and five originals. The traditional numbers are all pint raisers with rousing bar room courses while the originals are more contemporary sounding tales of New York Irish life, similar at times to Black 47’s more mellow moments.

In summary – upbeat, foot tapping pure Irish folk, kind of like the Wolf Tones with new batteries in their pacemakers with a splash of Black 47.