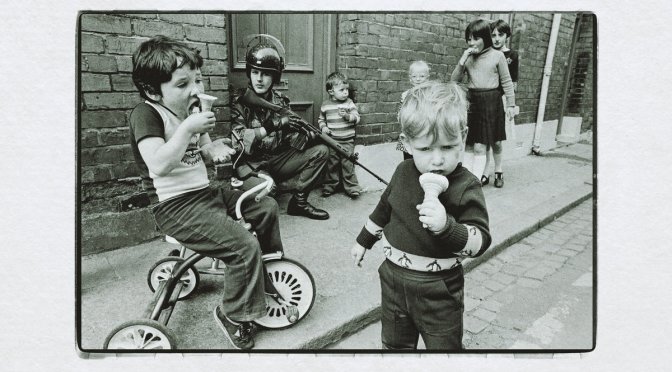 I love the idea behind split releases. They allow bands to share each other’s audience. Here we have two of the more established bands on the Celtic-punk scene splitting some vinyl. Australia’s The Rumjacks and Flatfoot 56 from the US. Since this EP is an Australian release I’m guessing this is more an introduction of Flatfoot to fans down under then The Rumjacks to the US.

Both bands contribute three tracks here with The Rumjacks kicking off on side 1 with the hooligan-ish Celtic punk of “Whitecaps”. The catchy “Fifth Ward Firestone” is more of the same. The side closes with a version of the old music hall standard “What Was Your Name in the States?” The flipside finds Chicago’s Flatfoot 56 initially with a little bit more of a laid-back groove on “Mud” before ramping up the energy. Tracks 2 and 3, “Sorry” & “Trouble”, are the bagpipes and punk rock growling vocals that Flatfoot 56 is best known for. 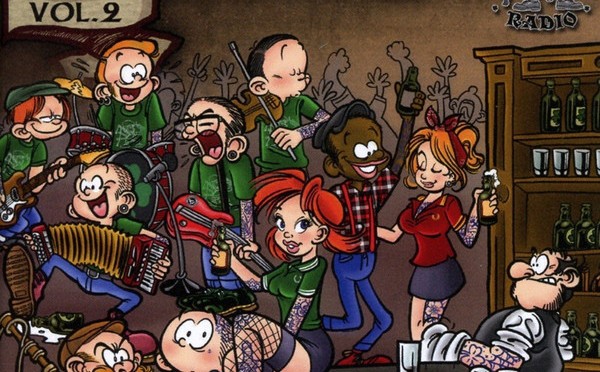 Making a mix tape or a comp CD is almost a lost art. Happy to say the art isn’t lost on Nico of MacSlons Irish Pub Radio. An amazing nineteen tracks in all and like all great comps it comes with old friends and a few friends you haven’t met before. Old friends include Kilkenny Knights, Flatfoot 56, The Real McKenzies and The Rumjacks. New friends include The Black Tartan Clan, Rovers Ahead and 1916. Check it out, you’ll too find some new friends.

South Side Chicago boot boys, Flatfoot 56, celebrate their 10th anniversary as a band with their 1st release on Old Shoe Records – Black Thorn. For awhile I think it was a far comparison to call Flatfoot 56 “Dropkick Murphys junior” and with their last release Jungle of the Midwest Sea they reached teenage years and now on Black Thorn they have reached adulthood. But with adulthood does come some maturity – middle eastern melodies, the occasional Johnny Cash touch and just a little bit more melody here and there – not a bad thing in my book but don’t worry Flatfoot 56 haven’t gone soft and on Black Thorn still sound like the Celtic punk equivalent of Wallace’s army of highlander’s about to slay the Sassenach at Sterling Bridge.

Didn’t flatfoot just release a CD? It must be the vigor and energy of youth but less then 12 months since “Knuckles Up”, Chicago’s favorite born again boot boys are back with a new full length. Flatfoot play loud and fast street punk / Oi with the mucho bagpipes. Dropkick Murphys and The Real McKenzies look out.

I’m trying to figure out what the drummer here is using for drum sticks – baseball bats? And the guitar? Is it strung with barbed wire strings? I’ve seen these guys live and at least one of ’em is close to 7 foot tall so I don’t doubt I could be right. I would describe a Flatfoot as a straight ahead Oi/Hardcore punk band with massive highland pipes (though the piper is a little guy with huge lungs). Dropkick Murphys and The Real McKenzies fans will love this sucker.

First of all hats off to Paddy Rock Radio’s John Bowels for putting this comp together. As someone who has put together a similar project I know what’s involved in pulling everything together and believe me it can be a major pain in the ass. Chicago based Paddy Rock Radio is a peer Shite’n’Onions and a long time supporter of the Celtic/Punk scene. Paddy Rock Volume 1 is a celebration of the shows 5th anniversary  and is a collection of both classic and new Paddy Rock. Some of the the music on offer here will be very familiar (The Peelers, The Prodigals, Greenland Whalefishers and The Mahones) and some stuff is new even to me. The new bands to me that I loved and now want to check out further are Flatfoot 56 (bagpipes and hardcore), The Killigans (Flogging Molly like with feeling and great vocals), Switchback (Reggae’n’Irish).

You may have heard of these guys already. If not, now is a great time to tune in. I swear I wasn’t going to do this, but I can’t help it! If you miss that early Dropkick Murphys sound, then “Knuckles Up” will probably make your day! That’s right, some top-notch sing-a-longs, a whole lotta street-punk, a little bagpipe, some mandolin…You get the picture. Let me also mention, Flatfoot Fifty-Six sound amazingly tight. It probably helps when 3 out of 4 of the band members are brothers.

Flatfoot 56 call the thriving metropolis of Chicago home, and are currently enjoying, and contributing to some of the great music currently coming out of the Big Windy right now. I must apologise, I’ve been holding on to this album for 8 or 9 months. (Misplaced during a move.) I’m sure they sound even better with almost another year under their belts. If you haven’t heard these guys yet, they have MP3’s up on their website: http://www.flatfoot56.com (And have songs up on the very addictive Myspace.com)

Here’s what I got from the website: Flatfoot 56 was formed during the summer of 2000 on the southwest side of Chicago as a three piece punk band.The brothers, (Tobin Justin and Kyle) started writing songs and putting a line up together in the fall of 2000 and by Christmas time of the same year they were playing their first show. In January of 2001 the band added the one man powerhouse of Josh Robieson to the line up and the band started working on including the bagpipes and a second guitar into its sound. With the addition of a new member, Flatfoot began to perfect their live show and build their fan base. In 2001 they recorded their first demo and the band got busy. In the summer of 2002 the band hit the studio once again to record their first full length album titled The Rumble of 56. This recording was done in Rockford IL. In a studio called the Noise Chamber. After the release of the rumble of 56, Flatfoot 56 was ready for the recording of their second album called Waves of War (2003). This second album saw great advances in the bands popularity. Flatfoot’s song That’s Ok saw some heavy radio play throughout radio stations across the mid-west. The band began headlining shows and even got a chance to play with some major acts in front of large crowds. Things seemed to pick up and the following year Flatfoot found themselves playing on a stage at cornerstone in front of an audience of over 700. It was at this show that the band released their latest album titled Knuckles up. This album has since been the bands best selling record and has shown no signs of letting up.

There’s a few rumors out there regarding them as a “Christian” punk band. Let me be the first one to say… “WHO THE FUCK CARES!” Sure there’s a lyric or two that mentions that topic, but is it going to stop you from enjoying the album? I should hope not. Any band that has influences that range from: The Pogues, The Real Mckenzies, The Street Dogs, The Proclaimers, The Business, Johnny Cash, Blitz, The Clash, Cock Sparrer are more than welcomed in my record player. I’m sure you’ll agree.