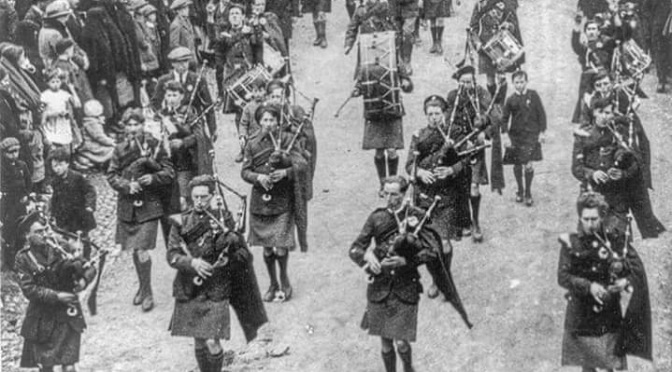 The Rumjacks – An poc ar buile

The Placks – The Bomb, the Bullet & the Gun

The Mahones – Shake Hands With The Devil

The Mickey Finns – The Ballad Of Duffy’s Cut

So its 9am the morning after the show, I’m struggling a little, however I’m feeling the need to get this down on paper before the buzz wears off too much. What a great show last night! It was truly sensational, and Melbourne gave it to Flogging Molly as much as they gave it to us. The intensity just went up and up with both sides dealing it back in spades.

The venue was fantastic. There was a smaller stage to the side where The Currency played, with the main stage set up on an adjacent wall ready to go for Flogging Molly. This made for a very smooth transition, and there was plenty of viewing room even for the small stage. The Currency were great, they kicked off with a tune that built up layer upon layer as it got going into quite a frenzy by the time the vocalist took the stage. The crowd was appreciative and after a few songs the keener (drunker?) members got quite an impressive bit of jig-spinning mosh-pit action going on by the stage. I would have joined in but it was still important to me at that time not to spill my drink.

The Currency definitely deserve a few words, these guys really know how to play and connected with the crowd well. I had only heard a couple of their tracks previously but I tell you what, I can’t wait for their album release, they have written some brilliant tracks. One that really stuck in my mind was referencing the 8/8/8 plight of the Melbourne unions for 8 hours or work, 8 hours of rest, 8 hours of sleep I think it is. It was also talking about the monument erected to commemorate this which I happened to stagger past drunk at 3am the previous morning but that’s a different story.

Anyhow, after a good set – I would estimate about 45 minutes – there was a relatively short break and Flogging Molly took the stage. The crowd was well pumped and moved into action immediately as the first riff of Selfish Man kicked in and the place went off. I’ve seen Flogging Molly once before as a support act in a large venue, but this was something else again – they were on another level. You could feel how hard they were playing from the moment they hit the stage. The intimate venue meant I could reach the foldbacks and so the band was less than a couple of metres away – and they brought all of my old FM favorites to life in a way I couldn’t have imagined.

It was particularly evident what a fan-base Flogging Molly now have in Australia when during the intro to The Likes of You Again, Dave King found himself drowned out by the crowd singing along – you could see in his face how taken aback he was that here were several hundred people thousands of miles away from home who knew all the words to their songs. And the band just responded in turn.

The sound was great at this venue, the mix was excellent, you could hear all of the instruments distinctly so whether it was the Bob Schmidt’s banjo in Drunken Lullabies or the Bridget Regan’s tin whistle in Devil’s Dance Floor it cut through like a knife. The playing was tight and powerful, exactly what you’d expect from such a hard-touring, seasoned band but it’s still so impressive to see. The set list was perfect for fans like me who will only see them every couple of years at best. It drew heavily from the first couple of albums, from memory they ran through: Salty Dog, Black Friday Rule, Selfish Man, The Likes of You Again, Devils Dance Floor, Swagger, Drunken Lullabies, What’s Left of the Flag, If I Ever Leave this World Alive, and Rebels of the Sacred Heart. From Within a Mile of Home they had my two favorites Tobacco Island and the title track plus Whistles the Wind and Seven deadly Sins. I think there were only 4 off the new album – Float, Paddy’s Lament, Requiem for a Dying Song and Lightening Storm – and all 4 were fantastic – and I certainly appreciated the majority being from the earlier albums that are so well ingrained in the musical appreciation section of my brain.

There were a couple of highlights for me from the night, the first was on the roof-top bar before the show – it was a warm Melbourne Autumn night so sitting outside was very pleasant – when I saw Nathan Maxwell walk past so I had a fan moment and accosted him at the bar to buy him a beer. I tried to impress him with how far I’d traveled to see them, realized I was carrying on like an asshole and eventually we sat down with my friends and discussed everything from Californian red wine to the sights of Chapel Street. He’s a hell of a nice guy and eventually wandered off to sound-check. I saw him later, he watched the entire Currency set from the midst of the audience chatting with people and soaking up the atmosphere. Half an hour later he was bathed in sweat playing his ass off as I was once again blown away by the power of Flogging Molly’s rhythm section (this was in fact my main recollection from last time I saw them – just how tight they had the rhythm section which is of course the heart of Irish music – without rhythm, how can you dance?).

Anyway, highlight number 2 had to be the encore, Dave King came out and played through the verses of Black Friday Rule with his acoustic guitar – it was magic with the crowd singing along – and then when the rest of the band joined in for the mad finale, it was truly awesome.

Throughout the show, the band were beaming, they’d found a home away from home with a manic fan-base, and this was only the Thursday night show – it wasn’t even sold out which the Friday one is – it’ll be off the planet tonight for sure, its just a shame I will be on a plane when they take the stage again, still I feel privileged to have experienced this show, definitely one of the best I have ever attended.

I been waiting almost a full year for The Currency to release their debut album – from the moment I first laid my ears on the incredible 888 single in fact. I can now happily attest that the bastard children of Fletcher Christian and Ned Kelly have made one amazing slab of Colonial folk punk* that will blow you away.

*folk rooted in the sounds of the British Isles with lyrics reflecting the colonial experience and a punk rock snarl only a case of XXXX can cause.

I’ve been hearing good things ‘bout Aussie colonial punks The Currency for a while but the single 888 is the first opportunity to official hear the band and I am truly blown away. Powerful, folk punk with a decidedly Australian stamp. Very much looking forward to hearing a full album (soon).