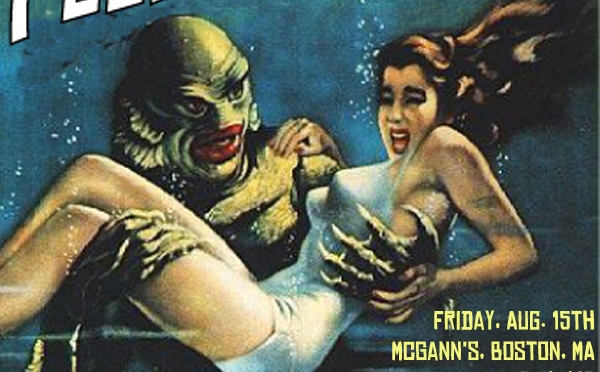 First off thanks to Kristen MadCat for going to the trouble of and taking the risk putting together the Punk Rock Fleadh, the Boston stop was a great success and hopefully the other gigs were similar and fingers crossed more will follow.

First up taking the low stage of McGanns were the New Hampshire/Southern Maine based the Pubcrawlers who played a short, powerful set of traditional standards and original compositions that got the growing crowd warmed up and scared off anyone that shouldn’t have been there. The Skels after some prompting were good enough to join them on stage during Finnegan’ Wake. The Pubcrawlers have always shown big promise on their demos and live they keep that promise. My biggest problem with the demos was always the vocals, yet live vocal man, Kevin hits the nail on the head every time.

The Gobshites followed and staying true to their name they were a bunch of Gobshites. The singer (Pete, I think) is a seriously funny bastard and the music as hoot even with the out of tune fiddle. The set started with the Pogues, “Streams of Whiskey” and ended with “Frigging in the Rigging” and in between we were treated to jokes, silly songs all given the acoustic-Celtic-hardcore treatment, a little rap also given the acoustic-Celtic-hardcore and Andy from the PubCrawlers reading a limerick.

Next up taking the stage were NYC’s The Ruffians who made a grand entrance through the audience marching behind the most colorful bagpiper I’ve ever seen. The set was tight Irish influenced Rock’n’Roll what would be closer in sound to say the Prodigals then the Dropkick Murphys. My biggest complaint was the over-distortion of the guitars during the first couple of songs.

I’m considering suing Jackdaw for terminal damage to my hearing – I’m writing this 3 days later and my ears are still ring – it only took two days for my head to stop pounding- I suing Guinness on that one. These guys just blew me away. I heard both of their CD’s through a friend who was raving about them and neither impressed me particular (I’m going to be checking them out again.) But live they were unbelievable, tight as the proverbial ducks arse or more correctly AC/DC’s rhythm section. Actually someone described them to me after the set as AC/DC with bagpipes though I’m more inclined to go with a Celtic Wall of Sound description. They certainly impressed me and a sizable section of the crowd who whipped up a serious pit – not bad for a band who were completely unknown in Boston before their set. Hopefully they come back soon and if you ever get a chance check’em out. One issue though and that’s the Bagpipers kilt was too short – never wear a Kilt above the knee, people start to ask funny questions about you.

The Skels headlined and I hate to say this but I had to fuck off home after 3 songs – I’m sure the Skels were their usual selves and gave a riot of a show (the new CD is the fucking business but you know that anyway).

Bet yah didn’t know that CBGBs stands for “Country, Blue Grass and Blues”. CBGBs started out its life as a live music venue that specialized in all three of those forms of music. The Ramones changed all that (and the face of rock’n’roll) forever. So it’s not that unusual for a band with a squeeze and Irish folk influences to be recording a live CD at the birth place of punk. But, don’t worry punk purists, the Ruffians rock hard enough to do “the Brudda’s” proud.

The Ruffians have come a long way since their 2002 debut EP, “The Naked & Proud”, and have developed into a very fine band indeed with a very distinctive original sound – squeeze box and wall of distorted guitars. “Live at CBGBs” is a testament to the band.

Now can somebody tell me what OMFUG stands for?

The Ruffians are a young Celtic Rock band from the NY area, who’ve been giging in and around the Tri State area since ’98, regulars at Black 47’s NYC gigs should be well familiar with them.

“Naked & Famous” is a six-track (well five and a half really) EP début. The first couple of tracks sound like they are live favorite’s (especially “More To Life”, a tale of Saturday night drinking and Sunday morning Catholicism) but they didn’t quite make that jump to CD as well as they could have. Things start getting interesting on the third track “Drunk Again”, with it’s Brit Pop crossed with Irish sound, imagine the Pogues kidnapping Morrissey, getting him real drunk and making him sing for them. “The Banker” is the best original, a slow powerful one with some really great uileann pipes. “All The Girls”, the half-track and introduction for “Never Will Marry” is similar to Flogging Molly’s “Grace Of God Go I” (with vocals almost as powerful as Mr. King’s). The final track is “Never Will Marry” an American/Irish folk standard but this version is a riff driven fuckin rocker with uileann pipes replacing the guitar solo, Linda Ronstadt never played it like this – excellent.

A good young band with plenty of potential, give’em a chance.