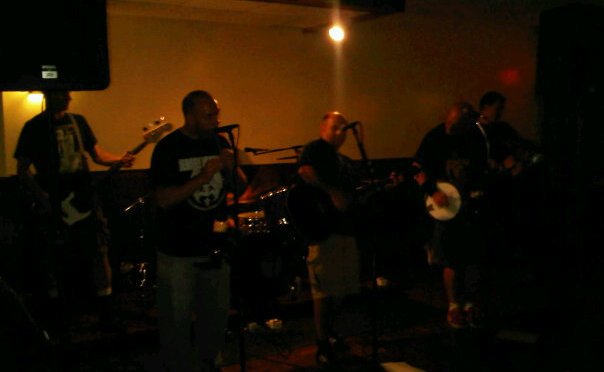 You might have notice on the bottom right hand side of the blog there is now a little widget that tracks site visitors and how they found Shite’n’Onions – well to my surprise I’m getting lots of visitors from Saudi Arabia – now originally I was thinking that my Arab friends were actually searching on Shiite and getting Shite but then I noticed that the key words being searched were, “hairy backed guys” and I realized to my shock and surprise that The Skels have a fan base in the Middle East!

Speaking of HBGs, The Skels were in Boston for the 1st time in a long while, paying their 1st ever gig in bass players Henry Ryan’s home from home – Brighton’s own The Castlebar. The special occasion that merited 3 sets from The Skels and was to celebrate Paddy Keys of The Larkin Bridges impending nuptials (congrats Pat), and The Skels were in rare form – lots of Pogues covers, their own master pieces and synchronized Judas Priest style guitar/banjo poses – in fact there were even a few new tunes and an new CD announced which is schedule for release at the end of the year (though Chris Skel wouldn’t commit to which year). It was also nice to see Benny from Toxic Narcotic join The Skels on his accordion for a few songs.

The Skels are always great to see live and 3 sets in The Castlebar a special treat – I’ve been going to see The Skels for over 10 years and they never fail to impress and hope to see ’em again when they come back from their tour of Iran, Iraq and Yemen.