If the Scottish independence movement had half the enthusiasm of exiled Scot, Hugh Morrison, then the upcoming vote for independence would be a shoe in right now. As we stand a week or so out from the vote its about 50/50 (and I predict a no vote as the pro-union side will hammer home on the economic cost of Scottish independence and fear of economic hardship, though if they continue to say stooopid stuff about needing a passport to enter England and anti-Scots sentiments continue to run in the press this could be a divorce and a nasty one).

If you’re not familiar with Hugh, when he’s not being a pro-independence balladeer he is the front man of Texas based Celtic-rock outfit MURDER THE STOUT and an auxiliary STREET DOG who adds Celtic instrumentation to both their tours and albums.

Scotland is Free is twelve tracks of Celtic-folk-rock, 5.5 tracks original and 5.5 tracks traditional and a cover of Alistair Hulett ‘s master piece, Among Proddy Dogs And Papes.

Scotland is Free, a call for Scottish independence, Irish unity and Welsh freedom – Crap! If that happens who will run England and keep’em under check.

The a fore mentioned , Among Proddy Dogs And Papes, 300 years of internal Scottish conflict condensed into a 3 minute musical master piece. Honestly you can get more insight into Scotland in this song then if you took an degree course in Scottish studies – what did Bruce Springsteen say about learning more from a three minute record then you could ever learn in school

Fair Flower of Northumberland, a traditional number from the Scottish boarders a’bout an outlaw who elopes with the local lords daughter and escapes a hanging.

Willie’s Gone To Melville Castle, another traditional Scottish track made famous by The Corries (Scotland’s Clancy Brothers) with a familiar melody that some of you may recognized from Mr MacGowans work. 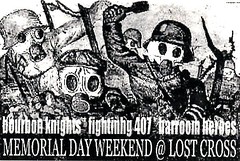