From the surf coast of Victoria, Australia, The Go Set crank up the pipes and take the fight to the bosses as they relive the past through the people who never got to write the history books.

The Go Set first marched into view, all bagpipes and tattered banners and bandaged heads held high, with 2005’s Sing A Song Of Revolution, an exciting an accessible collection emigrant anthems and mandolin-spiked drinking music. The Hungry Mile sees a continuation of the band exploring the lives of ordinary people across a two hundred year spectrum of time, and how much those lives often have in common. It also examines more detailed and personal themes.

In an era when many bands are lost in an almost glam haze of self conscious dress-ups – mascara, ties, nail polish, sardonic retro, shopping plaza ‘punk’, etc. – The Go Set recall a time when Australian bands weren’t afraid to wear their hearts on their sleeves and put their balls on the line. It seems like a very long time ago now, but when bands like Midnight Oil, Spy Vs Spy and Roaring Jack once sang their songs of protest and real lives lived, people listened without banding the word “political” around, as if that in itself conveyed a musical style. The Go Set are coming out of the same realist, impassioned and historically-connected worlds of these bands, an almost-but-not-quite-lost Australia that knew bullshit when it saw it and that could recognize the many crossbreeds of underdog that made up a society without – as is the case now – scrambling over every scrap and shiny thing in a mindless quest to become the over-dog. In this era of bitterly cynical derivation and depressing pop idolatry – all of it the perfect soundtrack for this most materialistic of times – singer songwriter Justin Keenan and The Go Set remind us that some people still work shit jobs, don’t accept the carrots that dangle and dissipate in front of them, don’t vote for right wing corporate warmongers and are more than prepared to say they are nothing short of fucked off with the whole lying, exploitative status quo.

Initially received as a ‘Celtic rock’ or ‘Celtic punk’ band on account of the bagpipe-driven singalongs and chiming mandolin reels and stomps, The Go Set nonetheless live in their own accent and stick to their own guns. As befits the instruments and folk influences, The Go Set have one foot in their sepia-toned history but also one in their own fired-up present; this is not historical re-enactment with a Marshall stack. The band play their trad instruments with a conviction and relevance that transcends any of the novelty value that is sometimes ascribed to some bands. The opening track ‘Jig Of Slur’ is pure whisky and whirling around a tinkers’ campfire and establishes the Goeys’ solid ceilidh credentials. This blends into the pub rock shanty of Bordeaux, a song that typifies the high-spirited but wistful Go Set sound and Keenan’s bare and unaffected singing style. Then straight into the brawny, mandolin-laced immigrant anthem Davey, a story of last drinks before sailing from Ireland to the timber mills of New South Wales. The historical voyage continues with the galley drums and pipe and whistle riffing of ‘Tale of a Convict’, a tribute to the desolation and utter powerlessness of Britain’s convicts in the South Seas. The Transportation era is brought into the present with the rumble of ‘Salamanca’, a rollicking live favourite that reflects on the irony of freedom of speech in modern day Hobart, where earnest dreadlocked lefties agonize over abstract crusades amid the monuments of what was once, after all, a British gulag. ‘All The Truth And Lies’ is a slab of classic eighties crunch rock with a punching drumkit and angry sentiment that brings to mind that other great angry surf band, Midnight Oil.

The pipes kick in again with ‘Union Man’, a straightforward tribute to those countless anonymous souls who feed the engines of our showcase western societies: “We are the underclass and the lucky country holds us dear. Union man, can you save us? We need just a quid a week and a raincoat for this rain. Clocking in but we are never clocking out again.”

The buzzing rock is broken with ‘Hardness Of His Hand’, an acoustic ballad that portrays the plight of a beaten wife and mother, and the tragic, timeless irony of her complex trap. Featuring Mark ‘Squeezebox Wally’ Wallace of Weddings, Parties, Anything fame on piano accordion, the tune does indeed bring to mind the great and much-missed Melbourne institution that WPA was.

Just when you are ready to die inside, though, the boys fire up again with ‘Power Of Youth’, a pure and thrilling fist-raiser that reminds us all of the simple truth that while us little people still have breath in our lungs and revel in our freedom, we cannot truly be downtrodden by the scornful McDomination of our lives and our society.

Then onto the album’s opus, ‘Scarlet Snow’. In this particularly moving number – waltzed along again by Wallace’s accordion – Keenan tackles the subject of World War One and its blood sacrifice with confidence and compassion. Beginning, as so many such stories did, in a country town, the idealistic volunteers become soldiers who are soon swept into the maelstrom of the western front, where “frozen men and metal littered all the field, covered for a moment by the winter’s soft white yield”. A timeless hymn alternating between crashing cymbals and sad fiddle laments, Scarlet Snow nonetheless conveys a sense of hope in its rousing chorus; “Lay down your guns, boys, help the ships pull south across the sea”.

After the sheer scale of Scarlet Snow, we’re back in acoustic mode again with ‘Learning Slowly’. This song sees the narrator reflecting on parenthood as it relates to the self-awareness and acknowledgment of being a human being, ie, flawed;“I drink too much at times, I have been known to fight and I always lose on sure things”. This is one to listen to on your own over a few quite beers on a sunny summer evening.

‘The Longest Holiday’ is another crunchy pop number, and sits in contrast to the following ‘Bombs Falling’ which begins with a bullish diatribe by Australian Prime Minister John Howard, once famously described by left-wing journalist Bob Ellis as having “a voice like a bucket of snot”. A grim punk shout against war, it is also a damning attack on Howard’s priggish and sanctimonious pro-Bush stance.

The last song is the show-closer ‘Scots Wha’ Hae’ – as much Radio Birdman as Robbie Burns – and the album closes with a few rounds of Jig Of Slurs, giving a real sense of performance to the whole show. A live band if there ever was one, The Go Set have done themselves justice with The Hungry Mile. In its humanity and spirited trad roots, it is bound to enjoy a broad appeal. Score: Six beers out of a possible six pack, (plus a whisky chaser!)

Review by Will Swan 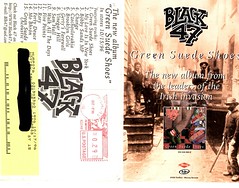